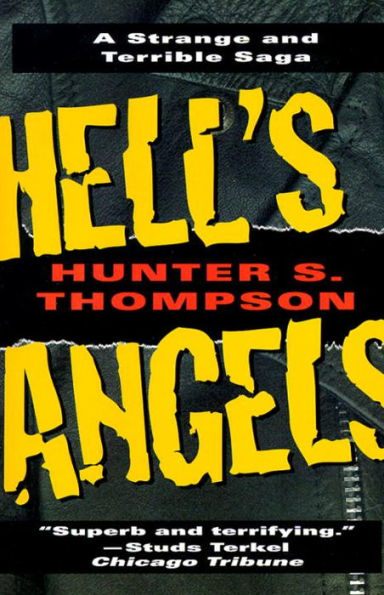 Excerpt From The Book:

Excerpt From The Book:

Thus begins Hunter S. Thompson’s vivid account of his experiences with California’s most notorious motorcycle gang, the Hell’s Angels. In the mid-1960s, Thompson spent almost two years living with the controversial Angels, cycling up and down the coast, reveling in the anarchic spirit of their clan, and, as befits their name, raising hell. His book successfully captures a singular moment in American history, when the biker lifestyle was first defined, and when such countercultural movements were electrifying and horrifying America. Thompson, the creator of Gonzo journalism, writes with his usual bravado, energy, and brutal honesty, and with a nuanced and incisive eye; as The New Yorker pointed out, “For all its uninhibited and sardonic humor, Thompson’s book is a thoughtful piece of work.” As illuminating now as when originally published in 1967, Hell’s Angels is a gripping portrait, and the best account we have of the truth behind an American legend.

“The bike was gone in an instant, but the clang and blast of its gear changes hung on the wind like the sound of a jet passing over.”

Hunter Stockton Thompson was an American journalist and author, famous for his book Fear and Loathing in Las Vegas. He is credited as the creator of Gonzo journalism, a style of reporting where reporters involve themselves in the action to such a degree that they become the central figures of their stories. He is also known for his promotion and use of psychedelics and other mind-altering substances (and to a lesser extent, alcohol and firearms), his libertarian views, and his iconoclastic contempt for authority. He committed suicide in 2005.

KEEP UP WITH SCOTCH PARLOR

We use cookies to ensure that we give you the best experience on our website. If you continue to use this site we will assume that you are happy with it.OkPrivacy Policy